According to the CSO, people in Ireland are earning more. As you can see from this chart, for every €100 that people were earning per week last year on average, they’re earning €103.50 per week this year. Further, the average wage today in Ireland is €745.09. Now, that’s not to say that everybody is earning this amount of money! Remember, this is an average, so it is made up of people who earn a lot of money as well as people who earn little. 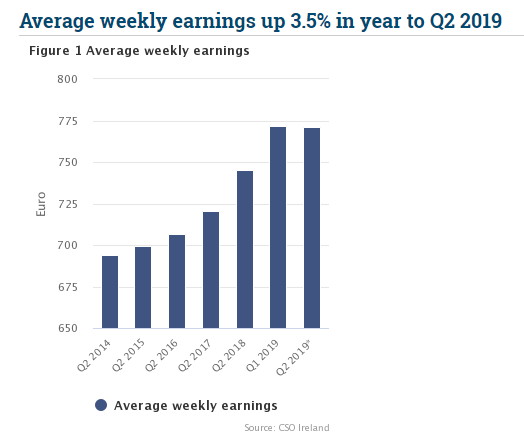 So what does this mean for the economy?

If more people are earning more money, they tend to spend more. People eat out more, go to shops that offer higher quality and go on more expensive holidays. Interestingly, when you examine the actual figures of how much more money people spend (3.4%, as per the below infographic), it’s almost exactly the same as the increase in wages (3.5% as per the graph above). 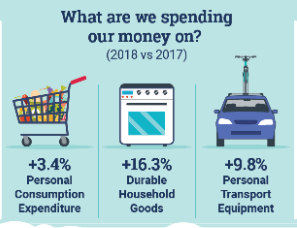 Increase in taxes collected from income

If you’re in employment in Ireland, you pay PAYE (Pay as you Earn), PRSI (Pay Related Social Insurance) and the USC (Universal Social Charge) on your salary. We live in a progressive taxation system and hence, the more that you earn, the more that you pay in taxes. Therefore, if salaries are increasing, so too will the income tax collected.

As per a recent government publication, the total amount of income taxes received by the government up to the end of October increased by over a billion euro to €1,321 million and this accounts for an increase of 8.1%.

Increase in the cost of doing business in Ireland

Naturally, if people are receiving this money, then somebody has to pay it. Ireland’s employers including both the public sector (i.e. the government) and the private sector (i.e. businesses) now have to ensure they have enough money to pay for these higher wages. This means that Ireland is a more expensive place to employ people. As a result, this decreases our attractiveness for foreign direct investment and makes it harder for small business to add talent to their team.