More flights between Ireland and the US!

In the news today, Independent.ie noted that Aer Lingus is planning a record number of translantic seats. This means that our national airline has the highest number of seats available ever for people who are travelling for Ireland to the United States. Specifically, this means that 1.9 million seats will be on sale to a variety of cities all over the US next Summer, which is a 10% increase on the year before.

So, what does this mean for our economy?

If businesspeople are travelling between Ireland and the US, they want to have the least amount travelling as possible. The more direct flights between Dublin, Shannon and Cork to places in the Us, the easier it becomes to export between the two regions because the time and cost of travel decreases. (I remember travelling to San Diego, California in 2014 and the furthest west that one could fly that time was Chicago with Aer Lingus and today, you can go to Los Angeles, San Francisco and Seattle on the West Coast of America).

Since many technology companies are headquartered close to San Francisco (e.g. Google) and Seattle (e.g. Microsoft), it’s a huge advantage that we have direct flights between the two regions for managers and staff to be able to travel easily for work. In addition, since people who travel to the US can get preclearance for immigration in the Irish airports, it means that when people arrive to their destination, they can simply collect their luggage and walk right out of the airport. In fact, this is such a benefit, that people who travel from other European countries to the US often choose to go through Dublin Airport. Specifically, 2.1 million passengers used the airport as a hub in 2018. 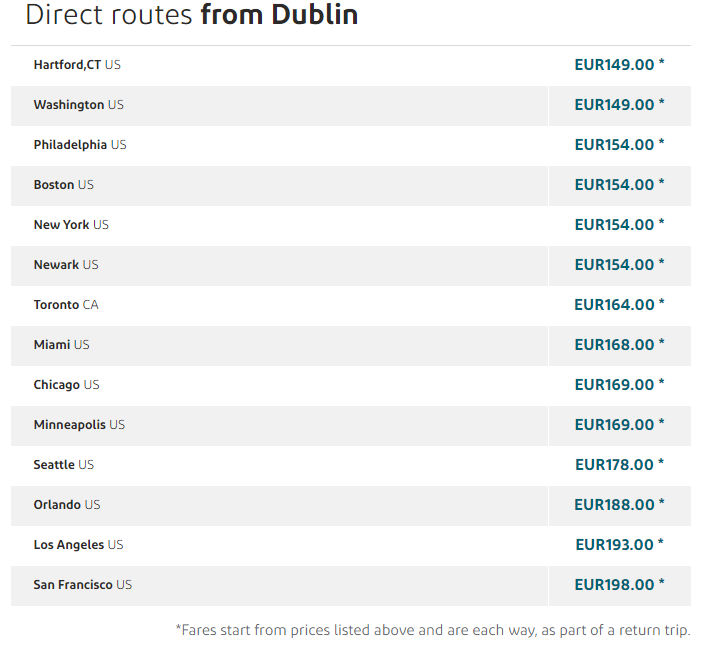 Increased tourism from the US

Since there are so many options to travel to Ireland from the US now, Ireland has more appeal as a tourism destination. In particular, Tourism Ireland projects that in 2019, we will visitor numbers grow from the US by 6% to 2.17 million visitors. They’re expected to spend €1.99 billion right around the island of Ireland.